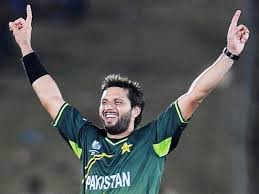 Okay, so maybe it was not THE best cricket match in the world which we recently won against India, but it made the nation happy and proud. Looking at the amazing similarities between the historic match of 1985-86 when Miandad’s six made us win against India by one wicket, history seemed to be repeating itself. Those matches are part of Pakistan’s folklore now… we celebrate those legendary sixes in unanimity.
But a lot has changed between 1985-86 and 2014… not so much the cricket as us… we have changed. After the match, a lot of us celebrated like crazy, from the security guard to the corporate CEO, and from the housewife to the doctor doing his evening shift. Yet, maybe with good reason, such moments show that we have a growing breed of cynics and killjoys, who cannot even empathise with the enthusiasm of others, leave alone share their excitement. Objectivity and so-called ‘Critical Thinking’ robs us of simple joys like being happy over Afridi’s sixes. Not only that some of us can’t be happy ourselves, we also want to kill it for the others. We have become a people of extremely strong likes and dislikes. And so many called all those celebrating as non-serious, not deep enough, too quick to celebrate, fickle or showering exaggerated praise on Afridi.
I am not a huge cricket fan but I am happy that my country got a reason to celebrate.
Yesterday’s spectacular win against Bangladesh had the whole nation smiling ear to ear. Is that a bad thing?
Yes, tomorrow if Boom Boom makes us lose a match, some of us will be quick to hurl angry insults at him. I wouldn’t but many would. And that is how some of us process success and failure. That is how we make sense of insanity. That’s who we are…a nation rich in contradictions. That is what makes us interesting in many ways.
So killjoys, if you don’t want to celebrate, feel free to indulge in catharsis on your timelines. But don’t call us ‘less’ for celebrating and don’t look down upon emotional waves disdainfully… this is this nation’s defence mechanism. Koi shak?
Published in The Express Tribune, March 6th, 2014.