Twitter RSS Feed
← Peaceful Co-existence – Possible in Pakistan?
A Book of Love, A Novel of Rumi – 40 Rules of Love →

Look at this face. This is Shaima AlAwadi. Killed. Reason? She was a Muslim woman who chose to wear the hijaab.

She was an average harmless homemaker. A mother of 5, whose children will forever wonder why their 32 year old mother’s life was snuffed out. An Iraqi refugee living in the Land of Liberty, in USA, this resident of California was assaulted in her house on the 21st of March. She was beaten with a tire iron. When her daughter 17 year old Fatima AlHimidi found her covered in blood, unconscious, in their living room, she also found a note next to her mother that said “Go back to your country, terrorist”. Shaima died on the 25th of March 2012. She had been getting threatening hate notes before she was assaulted.

While investigations are still underway, evidence is largely pointing in the direction that Shaima was a victim of a hate crime. If that is true, then Shaima was killed for no other crime but the fact that she was a Muslim woman who chose to don her hijaab which is a mark of a Muslim woman’s faith. It is her identity. It is her choice. A Muslim woman does not wear it because she wants to necessarily make a statement to antagonize anyone. This is her act of worship for her Allah. Just as peaceful an act of worship as reading the Torah or ringing a bell in a temple or singing hymns in a church. Just as peaceful as a nun choosing to cover herself or an Indian ascetic choosing to wear an orange robe. Why must then she be killed for it? And even when they are not killed for it, Muslim women are often subjected to judgment, to marginalization, to discrimination and to prejudice because of an act that she does purely for herself. Yes, there is a growing acceptability, but the perpetrators of hate crimes against Muslims still see the hijaab as a threat.

It is the same psyche of non-tolerant and hateful behaviour that was behind the shooting of the young African American boy, 17 year old Travyon Martin, in Florida, on 26th February 2012. The killer is believed to have had racist motivations behind killing Travyon who was wearing a “hoodie”, a mark of being an African American kid.

Travyon Martin - Killed for being an African American. For wearing a "hoodie"

Parallels are rightfully being drawn in the two cases. Important parallels. It is a person’s fundamental human right to wear what he likes, and make a statement with it peacefully if he/she likes. Such crimes hint in the direction that people belonging to certain races, skin colours, religions, ethnic backgrounds, and specially if they are migrants, are “lesser” and as such can be shoved around, bullied, mistreated, called names, judged, and as in these two cases, even be subject to violence.

The “Million Hoodie March” was inspired by the killing of Travyon. In another act of solidarity, activists world over are working on a “One Million Hijaabs” march for AlAwadi. Students at the University of North Carolina in Asheville are organizing a ‘hoodies and hijab’ rally on March 29 to “stand up against hatred and racism”.

"Hoodies and Hijabs: Uncovering Injustice"
Wake Forest and Salem Students, organized by Muslim peers, came together to show solidarity with Trayvonn Martin and Shaima Al Awadhi. Students are calling on our community leaders to condemn hate crimes and make sure our community is a safe place for everyone.
Please re-post this picture to raise awareness about these atrocities!

It’s a supremacist world out there. If a Jew or a Christian is beaten to death by a Muslim, it’s termed an act of terrorism, and I believe rightly so. But when an unarmed Muslim woman is killed in her home, it is also an act of terrorism. Loss of human life is always a huge loss, whether it is the loss of innocent civilian life somewhere in Europe or in Waziristan in Northern Pakistan.

Coming back to Shaima’s case, it has triggered an outrage that has begun to cause a ripple effect globally. Human rights proponents, activists, and even common people from all religions and continents are sitting up and talking about it. Because while there are supremacists out there, there also fair-minded and just people out there who know in their hearts when something is wrong, and dare to stand up and voice their protest against it.

This blog is not an attempt at venting mere pro-Muslim and anti-Islamophobic sentiment. It is pro-human rights and anti-hate crimes…..crimes committed against any human being, any where, belonging to any caste or creed.

So to the killer of Shaima AlAawadi, I would like to say that you don’t even know what you’ve started. In killing one hijaabi, you may have created millions.

And this hate crime is just going to make all those women out there who wear the hijaab even stronger in their resolve to do it, whether they are in the USA or France. It is a mark of liberty that one is allowed to practice what one believes in. It is a right no one must take away. 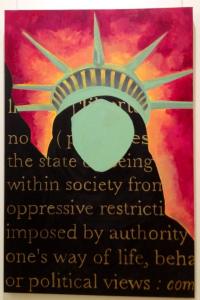